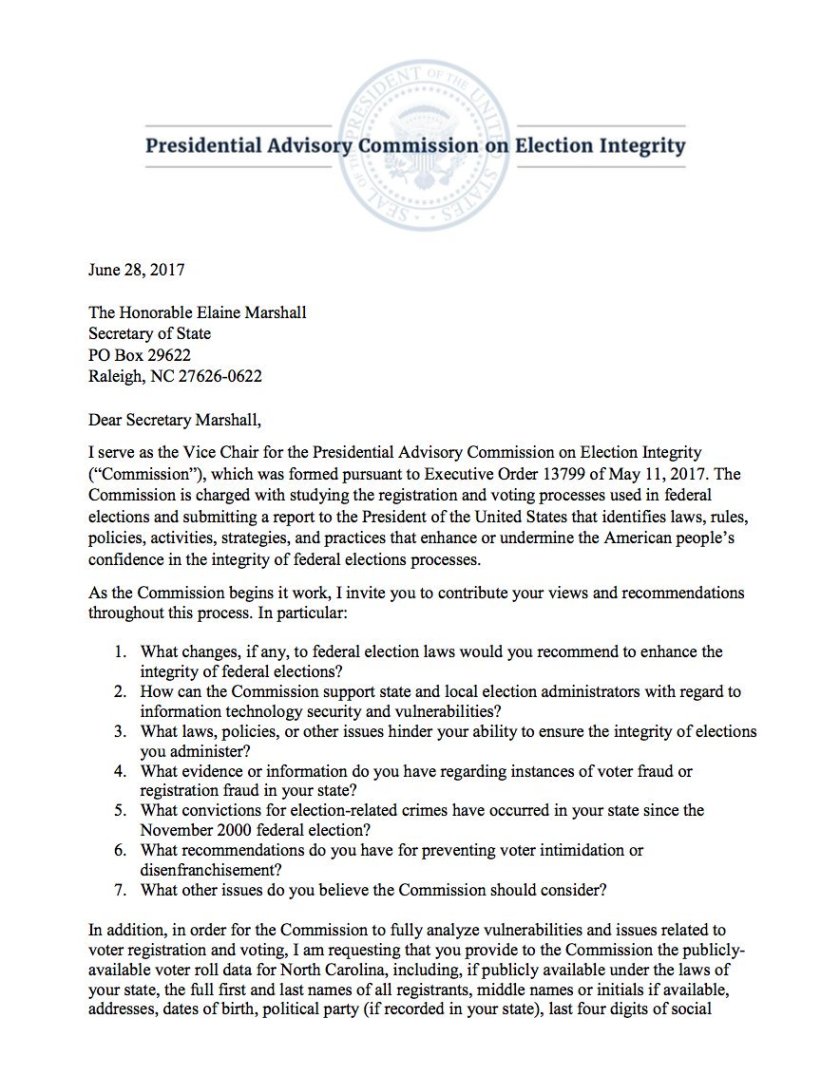 Trust us they said.  The Presidential Advisory Commission on Election Integrity is asking all 50 states for troves of voting data including voters’ date of birth and last 4 digits of their social security number.
The more I looked at this, the worse it got. The Commission plans to put the information of approximately 200 million voters  into a single, centralized, national electronic database. This kind of database will be ripe for the hacking, ripe for purging voters, and ripe for political profiling or other uses or abuses by whichever political party is in power.

The request was forwarded to the North Carolina State Board of Elections & Ethics Enforcement, which will, “provide only the data that’s already public and available under state law,” spokesman Patrick Gannon said in an email (WRAL) The commission, “won’t get the last four digits of people’s Social Security numbers, their dates of birth or their driver’s license numbers.”

Why are election officials, advocacy groups and tech experts concerned? It’s complicated but let me break it down:

#1. The Presidential Advisory Commission on Election Integrity is asking all 50 states for their voting rolls including voters’ date of birth and last 4 digits of their social security numbers to go into a centralized, national electronic database.

#2.  “any documents that are submitted to the full Commission will also be made available to the public.” (per request letter)
This data is already used for political purposes, but could also be used for commercial, marketing or scam and fraud purposes.

#3. This lays the groundwork for a National #Crosscheck system, and a National ID system.

A) Crosscheck:  The Commission’s vice chairman, Kris William Kobach is the Secretary of State of Kansas. As SoS, Kobach set up #Crosscheck Interstate Voter Registration Crosscheck so unreliable (falsepositives) FL & OR withdrew.

B) National ID: Attempts to shoe horn a National ID under auspice of election integrity has been tried before. Back in 2005, the Baker/Carter bi partisan commission recommended the implementation of REAL ID as standard voting card.

#4. This database will be a highly desirable target to hackers and cannot be secured:
“Kobach clarified that the personal data would be hosted on a secure server run by the federal government and not disclosed to the public.”
See Kris Kobach wants every U.S. voter’s personal information for Trump’s commission

Trump voter-fraud panel’s data request a gold mine for hackers, experts warn
Their concerns stem from a letter the commission sent to every state this week, asking for full voter rolls and vowing to make the information “available to the public.” The requested information includes full names, addresses, birth dates, political party and, most notably, the last four digits of Social Security numbers. The commission is also seeking data such as voter history, felony convictions and military service records.
…Security specialists told POLITICO they were especially perturbed about Kobach’s claim that the commission would publish all the voter data it receives.
…Experts also criticized the commission’s two options for states to submit their data: via a White House email address and a Pentagon-run file-hosting service.
“Email is the worst; it’s like sending all your postal mail using postcards instead of letters in envelope,” Hall said. “It’s one of the harder methods of communication to secure.”

It’s hard to secure databases from hacking.  It is estimated that in 2015 alone, 707 million records were exposed as a result of data breaches. Vigilante.pw lists over 2,100 websites which have had their databases breached, containing over 2 billion user entries in total.  See the list

‘Trust Us With More Data,’ Say Government Agencies Hacked By A 16-Year-Old.
The Hacker published the personal information of 20,000 FBI Agents and 9,000 Department of Homeland Security officers

Why is the commission using a military web site for collecting civilian data and why does it give an warning error when launched? https://safe.amrdec.army.mil/safe/Welcome.aspx

EPIC, The Electronic Privacy Information Center – has documented problems including privacy and security issues with a national id database.

“In comments to the TSA, EPIC urged the agency to abandon a proposed information collection plan under the REAL ID Act.. Since adoption of REAL ID, many states have suffered data breaches of DMVs because of criminals seeking REAL ID mandated documents. (Jan. 10, 2017)

#5. Who gets to decide who votes?  Should a politician be in charge of administering, updating or purging voter rolls? Kobach is A former chairman of Kansas Republican Party. He’s also a politician who ran unsuccessfully for Kansas’s 3rd congressional district in 2004 and is running for Kansas State Governor.

Election officials are expected to be fair and impartial administrators who act in a non partisan manner. These officials keep their personal and political views from affecting their decisions.

#6. The Crosscheck database Kobach deployed in his own state isn’t reliable. Yet Kobach wants to do this on a national level?

Per Travis Fain at WRAL: Bob Hall, executive director of Democracy North Carolina, said a crosscheck database Kobach markets to root out fraud is riddled with errors. Based on it, Hall said, he’s registered in North Carolina and Ohio because there is another Robert Hall there with whom he shares a birthday.

“It is incredibly stupid and a colossal mistake to create a public national database with sensitive information about voters; it threatens to damage election security and expose millions of Americans to identity theft and untold acts of fraud,” Hall said in an email.

There’s some irony in this too: Kobach…said that the request for the Social Security digits was meant “to prevent false positives,” such as when two people share the same name and birthday.  Via Kansas City Star